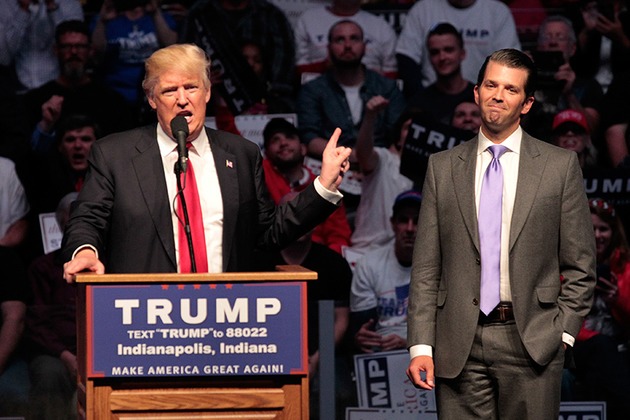 WASHINGTON, U.S. - While the Trump administration including the President himself, have been denying the damaging accusations made by former FBI Director James Comey in his scathing testimony last week - what Donald Trump's eldest son did on Sunday, is set to spell disaster for Trump.

Testifying at the Senate intelligence committee, Comey spoke about how the Trump administration 'lied, defamed, confused and concerned' him.'

Comey elaborated on the multiple meetings he had with Trump during the testimony - details of which were earlier available to the public only through leaks of the memos that Comey maintained.

Commenting on one of the more contentious subjects that a lot of Trump opposers have been waiting to hear - the fired FBI Director said he struggled to find a way to respond after the president appealed to him in an Oval Office conversation to drop the investigation into former national security adviser, Michael Flynn.

Comey said, "I was so stunned by the conversation that I just took it in, and the only thing I could think to say. I was playing in my mind, what should my response be?"

He said that he spoke positively of Flynn without saying he'd do anything with the investigation.

A day later, Trump specifically disputed Comey's assertions that he asked him to drop the FBI's investigation into Flynn.

Trump argued at a press conference, "Think about it, I hardly know the man. I'm not going to ask him to pledge allegiance. It doesn't make sense. I didn't say that. And there'd be nothing wrong if I did say it."

Following that, on Sunday Trump slammed Comey in a tweet saying, "I believe the James Comey leaks will be far more prevalent than anyone ever thought possible. Totally illegal? Very 'cowardly!'"

He also continued to dangle the possibility that he has "tapes" of his conversations at the White House.

Then, in a Fox News interview on Sunday, Donald Trump's eldest son seemed to confirm that Comey's testimony that the president requested Comey end the FBI investigation into Flynn's contacts with Russian officials, shockingly contradicting his father's repeated denials.

In the interview with Judge Jeanine Pirro, a Trump ally, the younger Trump said there was "no ambiguity" in the president's request to Comey, made during a February 14 Oval Office meeting.

Donald Trump Jr. told Pirro, "When he tells you to do something, guess what? There's no ambiguity in it, there's no, 'Hey, I'm hoping.' You and I are friends: 'Hey, I hope this happens, but you've got to do your job.' That's what he told Comey."

Comey had written in a memo post the meeting, that Trump told him, "I hope you can see your way clear to letting this go, to letting Flynn go. He is a good guy. I hope you can let this go."

Comey's account is at the centre of the question of whether Trump obstructed justice by asking Comey to end the investigation and then fired him when he did not.

During his testimony, Comey said he "took it as a direction," given that the president had dismissed everyone else from the room to meet with Comey alone, before making the request.

It also followed a previous one-on-one encounter in which Trump asked Comey to pledge his "honest loyalty."

Trump's son went ahead and attacked Comey for not taking action if he "felt threatened" by the president.

Trump Jr. said, "For this guy, as a politician, to then go back and write a memo: 'Oh, I felt threatened.' He felt so threatened, but he didn't do anything."

Further, Trump himself said a day later, "I didn't say that. And there'd be nothing wrong with it if I did say that, according to everybody that I read today, but I did not say that."

Comey testified that he asked Attorney General Jeff Sessions to not allow Trump to meet with him alone.

However, he did not feel it was appropriate to tell Sessions about Trump's request, fearing it would impede the larger FBI investigation into the Trump campaign's ties to Russian officials.

Trump and his allies have continued to dispute Comey's detailed recollections and attack the fired FBI director's character, while simultaneously claiming that his testimony vindicated the president.

After the testimony, Trump accused Comey of committing perjury and said he would be "100 percent" willing to testify under oath to contradict Comey.

According to Bill Jeffress, a lawyer at international law firm Baker Botts LLP,  "Mueller will certainly explore the reasons that Trump sought to end the investigation of Flynn, and if he finds corrupt intent, that is a huge problem for Trump."

All eyes are now on Sessions, who will be testifying in a public hearing on Tuesday.