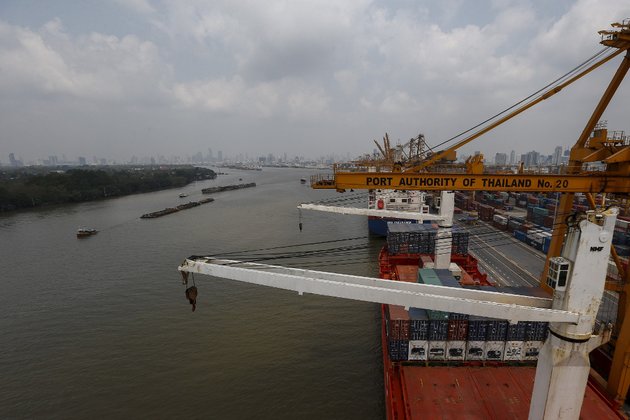 Thailand's Prime Minister Prayuth Chan-o-cha this week publicly endorsed a proposed land bridge between the Gulf of Thailand and the Andaman Sea, apparently shelving a long-discussed project to build a canal across the Malay Peninsula.

The dueling project ideas have generated debate, with some calling the canal a security risk and others arguing that a so-called land bridge - deep sea ports connected by road and rail - would be far less profitable and practical than the waterway.

Prayuth on Tuesday touted the land bridge as a way to kick-start economic growth at a time when tourism and exports have taken a huge hit because of the COVID-19 pandemic.

"[We] are studying a land bridge, I gave the guideline. I think it will help the economy in the long term," Prayuth said. "We need a new project. We are looking into how to connect transportations of the west coast and east coast."

A bridge or a canal would dramatically shorten travel time for ships sailing between the Indian Ocean in the west and the South China Sea and the Pacific in the east. Currently, the Malacca Straits, a narrow waterway between peninsular Malaysia and Indonesia's Sumatra island, is the shortest east-west sea route.

Prayuth didn't mention the Thai Canal project - also referred to as the Kra Canal - while talking about the land bridge. His transportation minister has brought it up twice since July, and both times said the canal was a nonstarter.

"A canal, it won't happen, and people are opposed to it," transportation minister Saksiam Chidchob told a seminar in July.

He added that the canal isn't feasible because water levels on either side of Thailand vary.

"To dig a canal, I don't think is suitable for Thailand because the water levels in the Andaman Sea and the Gulf of Thailand differ. In the canal, there must be transition points, which takes space and is time-consuming."

"If we construct deep sea ports in Chumphon and Ranong and connect them with a land bridge that has dual tracked railway and highways for 120 kilometers... that would save two days of sailing [through the Malacca Straits]," he said.

In August, Saksiam told Bloomberg News the canal project was being replaced with the land bridge one, and the government had already approved spending 165 million baht (U.S. $5.3 million) to study the overland option.

Neither Prayuth nor Saksiam have said how much the land bridge is estimated to cost. BenarNews, an RFA-affiliated online news service, contacted Saksiam's office for comment but didn't hear back.

Meanwhile, a sub-committee of Thailand's House of Representatives, set up in January to look into the Thai Canal, said it is almost ready with its initial study, retired Maj. Songklod Tipparat, the chairman of the sub-committee, told BenarNews.

He is among the supporters of the 120-kilometer-long canal.

"The Klong Thai (Thai Canal) project is unstoppable despite talks on the land bridge," Songklod said. "The land bridge doesn't work because it costs a lot to transfer containers from ships to trucks or trains."

"Unloading goods at one port, transporting them across the country by rail or road, and then uploading them at another port increases rather than reduces transportation costs," Storey wrote in an article published this month in Today, a Singapore publication.

The Thai Canal proposal would involve construction along what's called the 9A route, which cuts across five southern provinces. BenarNews

Songklod said a canal would be immensely profitable.

"The project will cost 2 trillion baht (U.S. $64 billion)," he said, but the "revenue will be double that figure every year." A peripheral "economic corridor" would provide additional benefits, he said.

Over 40,000 Thai fishing boats in the Andaman Sea and the Gulf of Thailand could sail back and forth quickly and frugally, he said, adding that the canal could also accommodate 350,000 to 500,000-ton ships.

The canal would transverse five southern provinces - from Krabi on the Andaman Sea, through Nakhon Sri Thammarat, Pattalung and Trang, to Songkhla on the Gulf of Thailand, he said.

Gen. Pradit Boonkerd, president of Thai Canal Association, which supports the project, told BenarNews the canal would be 30 meters deep and 400 meters wide.

"Sailing through it is convenient, safe and economical, saving 1,200 kilometers" when compared to going through the Malacca Straits, he said.

"If we have the Thai Canal connect with the high-speed train networks in northeastern Thailand, Laos and Vietnam, that will create a million jobs."

According to Songklod, opinion polls in Krabi, Pattalung and Trang show that a majority of people support the canal. People in Songkhla and Nakhon Sri Thammarat have yet to be polled, he said.

Meanwhile, those against the canal worry that it will cut off the troubled Deep South region, three provinces and a handful of neighboring districts on Thailand's southern border where a violent insurgency has killed more than 7,000 people since 2004.

A land bridge is safer, they say, because it won't divide the country into two parts with a canal that is wider than an average river.

Some also fear China's possible involvement in building the canal, which would give Beijing undue influence in the region. Although Beijing has not publicly commented on funding it, it has invested billions around the region as part of One Belt, One Road (OBOR), an ambitious program to build a global network of ports, highways, railways, bridges and power plants.

Involving China in the construction "would bring in China as a permanent security partner that could not easily be kicked out," wrote Salvatore Babones, a professor at the University of Sydney, in Foreign Policy this month.

The House subcommittee studying the canal proposal stoked these fears by inviting three Chinese-Thai companies to demonstrate a model of the project. The firms invited were China State Construction Yangtze River (Thailand) Company Limited, The Best Group and The Aviation Industry Corporation of China.There are also worries that Thailand could be caught in tensions between India and China, both of whom are jockeying for influence in the region and were recently involved in violent skirmishes in a disputed Himalayan border area.

The Thai Canal would allow China "to quickly move ships between its newly constructed bases in the South China Sea and the Indian Ocean," and would "fit neatly into Beijing's plans to encircle India," wrote Babones.

A former member of the Thai House sub-committee studying the canal has similar views on how the canal would help China.

"I think China supports the canal digging for security reasons as it will allow China's armada to cross and control the two oceans," Prasithichai Noonual told BenarNews.

"If China digs the canal, she could control the two oceans and will have disputes with the U.S. and India, and Thailand's south would be a flashpoint."

Prasithichai said he quit the sub-committee because of these concerns.

"I am concerned and I disagreed with the committee. It's insistent it wants to dig the canal rather than discussing its pros and cons comprehensively," he said.

"The committee shouldn't act as a lobbyist, so I quit."