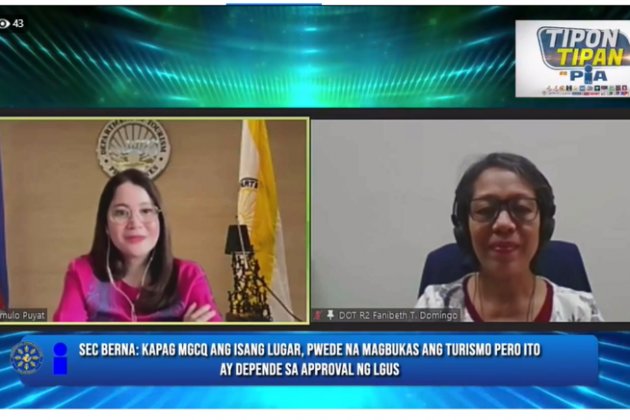 TUGUEGARAO CITY, MAY 4 (PIA) -- Department of Tourism (DOT) Secretary Bernadette Romulo-Puyat revealed in a virtual localized press conference the DOT's ongoing projects which aim to restore tourism in Cagayan Valley as the region progressively struggles through the COVID-19 pandemic.

Among these are the continuous monitoring and accreditation of tourism establishments to ensure that they are compliant with health and safety protocols. This is apart from the product audits conducted on major tourism destinations in Cagayan Valley to enforce safety guidelines before accommodating tourists.

The DOT's Tourism Promotion Board (TPB) is also currently implementing programs that seek to bring back the confidence of tourists in Region 2 through the Tourism Infrastructure & Enterprise Zone Authority and the Tourism Road Infrastructure Projects (TRIP).

The secretary said further that 70 million pesos from the 1 billion allocated for tourism roads under the Bayanihan 2 Law is allotted to Cagayan to fund access roads to tourism circuits like the Quirino Tourism Circuit and East Coast Cagayan Tourism Circuit.

Besides funding for tourism roads, 3.139 million pesos was allotted to the DOT Region 2 by the TPB for the product audits. According to Romulo-Puyat, two million pesos is reserved for the design, creation and launching of the DOT Region 2 Contact Tracing and Tourism Management Online Platform-Tourism Mobile Application.

The DOT is also extending cash assistance to the region's displaced tourism workers.

Last year, tourism receipts in Cagayan Valley went down to 176 million pesos from 4.1 billion pesos in 2019, reflecting a 96 percent drop. This had a significant negative impact on tourism workers and stakeholders according to Romulo-Puyat.