UN Alarmed at Police Killings of Peaceful Protesters in Colombia 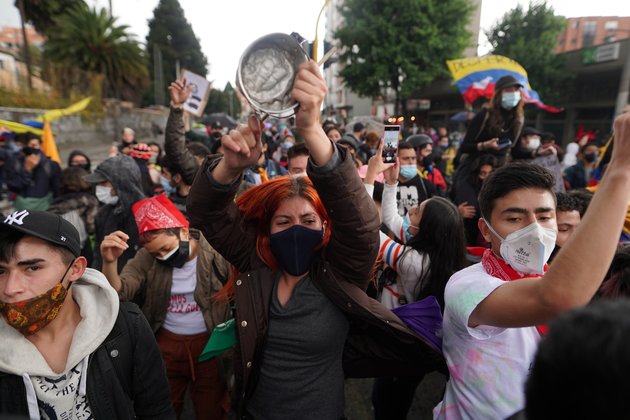 GENEVA - Police in the Colombian city of Cali reportedly opened fire on demonstrators who were protesting tax reforms. The U.N. human rights office said it is in the process of verifying the exact number of casualties and trying to determine how this incident could have happened.

Human rights spokeswoman Marta Hurtado said it is important to get to the bottom of these events.

Hurtado said her office has received reports about people being arbitrarily detained. Human rights defenders, she said, report being harassed and threatened by security forces.

"We have seen videos of police dragging demonstrators, including injured demonstrators..." Hurtado said. "We have witnesses of excessive use of force by security officers - shootings, live ammunition being used, beating of demonstrators."

There has been no response from the Colombian government to the U.N. remarks. Colombia's defense minister, Diego Molano, has alleged that illegal armed groups are infiltrating the protests to cause violence.

The head of Colombia's national police force, General Jorge Luis Varga, said 26 allegations of police brutality are under investigation. News reports cite police as saying their forces came under attack amid acts of looting and burning of buses.

Strikes against a proposed tax reform bill have been ongoing since April 28. Demonstrators have continued their protests despite an announcement from the Colombian presidency on May 2 that it would remove the bill from consideration by Congress.

Hurtado said there have been at least 14 deaths since the protests began, including one police officer. She said most of the protests have been peaceful and hopes they remain so during mass demonstrations called for Wednesday.

"Given the extremely tense situation, with soldiers as well as police officers deployed to police the protest, we call for calm," Hurtado said. "We remind the state authorities of their responsibility to protect human rights, including the right to life and security of person, and to facilitate the exercise of the right to freedom of peaceful assembly."

The human rights office said under international law, force should only be used if strictly necessary and in proportion to the threat posed. It said law enforcement officers should only use firearms as a measure of last resort against an imminent threat of death or serious injury.