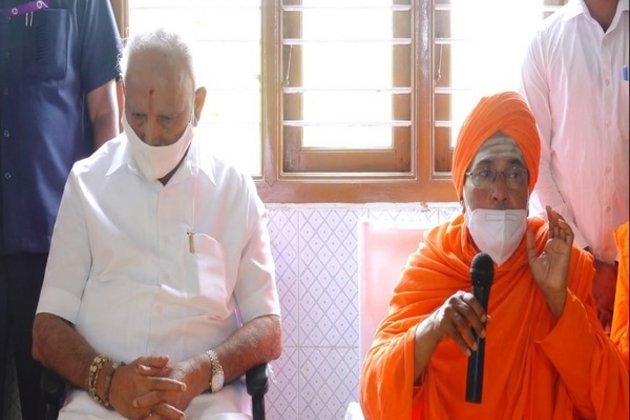 Shivamogga (Karnataka) [India], June 13 (ANI): Malenadu Mathadishara Parishat, the union of seers of the Malnad region, on Saturday extended support to Karnataka Chief Minister BS Yediyurappa and said any leadership change in the state would be more dangerous than the ongoing COVID-19 pandemic.

Chief Minister BS Yediyurappa was present at the programme at Shivayogashrama in Shikaripura Taluk on Saturday.

Speaking at the occasion, Bekkina Kal Mathh Seer Mallikarjuna Murugharajendra said, "No one should intervene and trouble the smooth functioning of the government. If anyone tries to destabilise the government, they will have to pay for it. Yediyurappa has faced a lot of problems after becoming the Chief Minister. He faced the worst floods and COVID pandemic. We should appreciate his efforts in tackling the crisis effectively."Malenadu Mathadishara Parishat said they would support Yediyurappa to remain in power till the completion of the term.

"The leadership change in Karnataka will be more dangerous than COVID-19. Today, Karnataka needs Yediyurappa to tackle the pandemic situation. We need a Chief Minister for the developmental works in Shivamogga too. The seers of Shivamogga are always with Yediyurappa," added Murugharajendra.

Earlier on Saturday, Yediyurappa chaired a meeting to discuss the COVID situation in Shivamogga.

Last week, Yediyurappa had stated that he will resign from the post the day the party high command asks him to quit. Speaking to the media persons, he had said, "I will resign the day the party high command asks me to quit. I do not speak about the rumours and the speculation created by some of the ministers and legislators.""High command has given me the opportunity - I am trying to utilise it and I am trying to serve the people. I do not want to comment on the rumours of whoever speaks against me. If my high command wants me to resign, I will resign. I myself am involved in working for the development of the state," he had added.

Earlier, several MLAs and ministers demanded that Yediyurappa should step down as chief minister.

State Tourism Minister CP Yogeeshwara in a statement had said that instead of the Chief Minister, his son has been ruling and controlling the Ministries of Karnataka.