Ollie Robinson to return to cricket pitch with Sussex 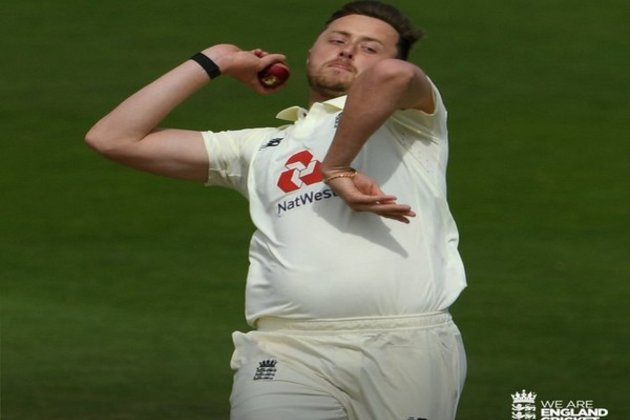 London [UK], June 14 (ANI): England pacer Ollie Robinson will return to the cricket pitch to play for Sussex's second team in the T20 game against Hampshire, his county confirmed on Monday.

"Mitch Claydon is added to the Sharks squad as cover for the trip to Chelmsford. Henry Crocombe will not travel and will play in Sussex's behind-closed-doors Second XI T20 matches against Hampshire at The 1st Central County Ground instead," Sussex said in an official statement.

"Henry will be joined by Ollie Robinson in the second team. Ollie makes his return to cricket after taking a short break last week," he added.

Last week, Robinson had decided to take a short break from cricket after he was suspended from international cricket by the England and Wales Cricket Board (ECB).

"After a difficult week, Ollie has decided to take a short break from the game to spend time with his young family," said Sussex in an official statement.

"Player and staff welfare - including mental health and wellbeing - is a priority for the club and, as such, Sussex Cricket fully supports Ollie in his decision. When he is ready to return, Ollie will be welcomed back to the club, where discussions with the remainder of the squad over the last week have made clear that he retains the support of all his Sussex teammates. We remain in close contact with Ollie from a welfare perspective and will issue further updates on his availability at the relevant times," it added.

Last week, Sussex bowler Robinson was suspended from all international cricket by ECB pending the outcome of a disciplinary investigation following the tweets he posted in 2012 and 2013. Robinson left the England camp immediately and he returned to his county.

Robinson had "unreservedly apologised" for the "racist and sexist" tweets he posted over eight years ago as a teenager. Robinson also admitted that he is "ashamed" of making racist remarks as his tweets from 2012-2013 resurfaced on social media. (ANI)