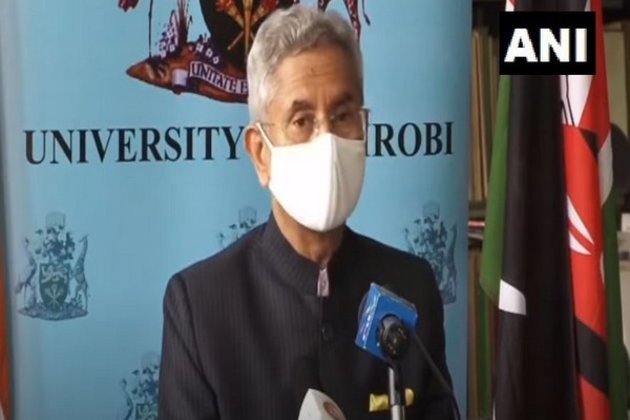 Nairobi [Kenya], June 14 (ANI): During his three-day visit in Kenya, External Affairs Minister S Jaishankar on Monday inaugurated the renovated Mahatma Gandhi Library at the University of Nairobi in Kenya and said that India's association with this university goes back to decades.

Speaking at the inauguration, the External Affairs Minister said that "Today as the renovation of the library stands completed and generation of Kenyan students will find it useful in their quest for knowledge. I can say that we have delivered on that promise."He thanked all those in Kenya, India, high commissions, the ministries in the university, who made that possible. He stated that this is not just a moment for self-congratulation. It's also a time to reflect on the larger significance of the relationship between India and Kenya.

"India's association with this university goes back decades. And the very memory of Mahatma Gandhi was meant to underline our strong solidarity. It also reminds us of the Kenyans with Indian heritage, who have contributed so much to this university's growth and success. In the decades that have passed this sentiment has not diminished," Jaishankar said.

He also recalled Prime Minister Narendra Modi's visit to Kenya, in July 2016. He said, "Now, five years ago, I had the honor of accompanying Prime Minister Narendra Modi. During his state visit to Kenya, in July 2016.""Since the 1960s Indian universities have hosted many young Kenyans who have risen to important positions in various fields. Every year, the government of India offers more than 400 scholarships to Kenyans. Even during the pandemic. We continue to maintain this relationship virtually through activities."Talking about globalisation, Jaishankar said, "There is no doubt that the world today is much more interlinked, much more interdependent, but it should not be that globalization, apply only to resources and markets. While production centers remain concentrated in the hands of a few.""The COVID 19 pandemic has brought home the dangers of relying on limited geographies. When supply chains were disrupted and demand outstripped supply, the more vulnerable will inevitably get shortchanged. Africa cannot afford to see that continue. And this goes against the very spirit of South South cooperation. The direct lesson from the pandemic is the need today, the pressing need I would say for decentralized globalisation," he added.

He further stated that "So today I want to tell you all that, the rise of modern Africa is not just a noble sentiment. It is a long-awaited expectation. I would even say it is a profound calculation. It is only when this continent of more than a billion people, takes its rightful place that the full diversity of our planet will find proper expression. It is then that we can justifiably declare that the world is truly multipolar."In 1956, the statue of Mahatma Gandhi, which I had the honor to place flowers at, was unveiled at this very University 60s Decades later, the modernisation of this library is a reminder of what brings us together, he said.

Concluding the briefing, he said that "by underlining that it is only by greater international cooperation and stronger capacities that result from it, that we can in the mahatmas words bring about the change we seek. India, and Kenya, have the opportunity to demonstrate that their partnership can make a difference, as they say. Let us work hard and immunity." (ANI)