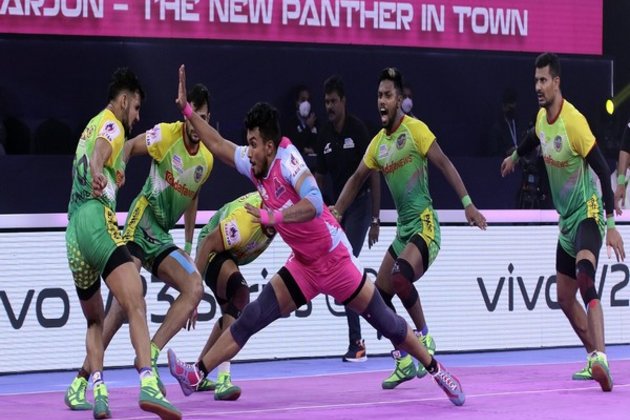 Raider Deepak Hooda scored a Super 10 and was aided by Arjun Deshwal with 9 points as the Panthers continued their habit of beating top teams in Season 8.

Patna had an off day on the mat with their raiders struggling to make the required impact. Coach Ram Mehar Singh will have a lot to ponder after a loss that exposed Patna's weaknesses.

The first half was a closely contested affair with Jaipur matching Patna blow for blow. Monu Goyat looked impressive for the Pirates in the initial minutes while in-form Deepak Hooda took majority of raiding duties for the Panthers. There were no tackle points scored in the first ten minutes with scores even at 10-10.

Pink Panthers' Sahul Kumar slowly found the rhythm in the defence towards the closing stages of the half. He and Deepak Hooda combined to inflict the first ALL OUT in the last minute to open a 4-point lead. Jaipur's Arjun Deshwal then produced a 2-point raid to end the half 18-12 in their favour.

Prashanth Rai and Sachin also started raiding more for the Pirates in the second half, but they failed to close the gap on the Panthers. Patna thought they had a Super Raid when Monu Goyat's finger sneaked past the midline close to the 9th minute of the half.

But the referees said the raider's struggle had been over. With 10 minutes remaining, Jaipur had a 5-point lead. The big difference between the teams was how they approached their Do-or-Die raids. Jaipur converted most of theirs while the Pirates often perished.

Jaipur had a healthy 7-point lead, and they used the momentum to inflict another ALL OUT with under 2 minutes remaining. Mohammadreza Shadloui had a poor outing in the left corner for Patna and Jaipur picked points off him to clinch the win. (ANI)